Select a Track from a Playlist below:

The Sacred Chants - Information and Notes 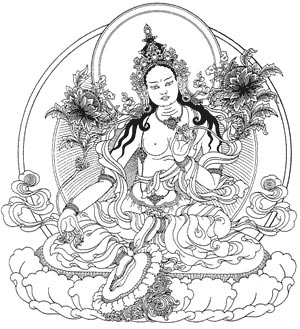 Tara (whose name means "star" or "she who ferries across") is a Bodhisattva of compassion who manifests in female form. In Tibetan, Tara is known as "Dölma" (Sgrol-ma), or "She Who Saves". In particular she represents compassion in action, since she's in the process of stepping from her lotus throne in order to help sentient beings.

According to Sangharakshita, a traditional explanation of the mantra is that the variations of her name represent three progressive stages of salvation.
1. Tare represents salvation from mundane dangers and suffering. Tara is seem as a saviouress who can give aid from material threats such as floods, crime, wild animals, and traffic accidents.
2. Tuttare represents deliverance into the spiritual path conceived in terms of individual salvation. In traditional terms, this is the path of the Arhant, which leads to individual liberation from suffering.
3. Lastly, Ture represents the culmination of the spiritual path in terms of deliverance into the altruistic path of universal salvation - the Bodhisattva path. In the Bodhisattva path we aspire for personal enlightenment, but we also connect compassionately with the sufferings of others, and strive to liberate them at the same time as we seek enlightenment ourselves.

The Moon She Dances  written by Leno - Prana Chants

What a Goodly Thing  The Spinners